No Rest for the Wicked

Whew, it's been a busy couple of days. With little more than three weeks to go, the demands on my time are coming from all over the place. Just since Monday, I've completed a survey for the Hamilton District Heavy Construction Association, been invited to a radio debate on AM900 CHML and written an opinion piece for Raise the Hammer.

On top of that, I've submitted another answer to a question from the Dundas Facebook page, shot a video to post there as well as on The Spec election site and even wedged in some canvassing in the Yorkview neighbourhood. Just now, I got another survey in my Inbox from the Social Planning and Research Council of Hamilton. It's in the queue, just behind the questionnaires from Hamilton Organizing for Poverty Elimination and Dads Against Dirty Air.

In a word, it is UNRELENTING!

Tonight, I'll be chairing the last meeting of the Hamilton Cycling Committee at City Hall until after the election. With luck, I won't be eligible to chair the next one (i.e. I'll be a Councillor).

Tomorrow, I'm looking forward to seeing my new election ad in the Dundas Star News. I worked hard to make it bold to convey a simple message. I really like it. 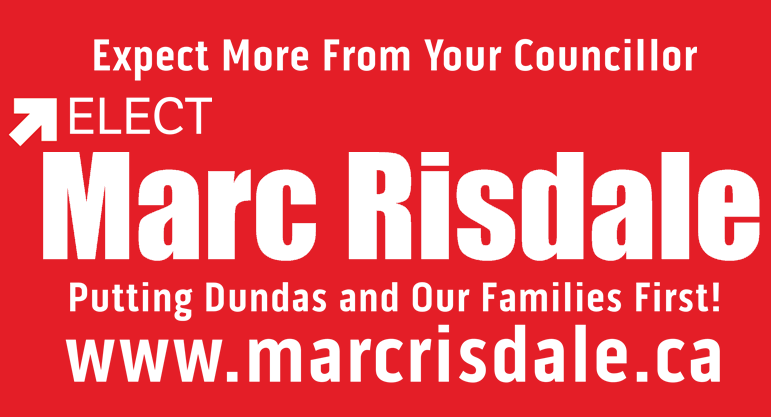 Marc
Hi, my name's Marc and this blog will document my adventures in running for Councillor for Ward 13, Dundas. www.marcrisdale.ca, www.facebook.com/MarcRisdale2014 @risdale4dundas