Tonight, my neighbours are hosting a meet and greet for Mayoral candidate Brian McHattie. They've asked us if was OK if the event could spill over into our back yard (there's no fence between us). We have a great relationship so we naturally said it would be no problem.

I've spent some time over the last couple of mornings tidying up the yard. It's been a pretty dry summer and a lot of the plants have seen better days. Here's how it looks with everything mown, swept and raked:

I'm also excited to attend the event. While I'm quite busy trying to get myself elected, I'm also a voter and I have yet to make my decision for Mayor.

Full disclosure: Brian McHattie is the candidate I know the best. He frequently attends Cycling Committee meetings as Councillor and he is also the Chair of the Hamilton Conservation Authority, with which I have obvious ties.

As a normal human being, I am naturally inclined to vote for the person I know best. However, I would have agreed to share our back yard with any candidate our neighbours decided to host.

I've been asked several times now who I support for Mayor and, while I am prepared to work constructively with any eventual winner, I'm still gathering information.

To my mind, there are three front-runners (I will list and discuss them in alphabetical order, as they will appear on the ballot): Brad Clark, Fred Eisenberger and Brian McHattie. I follow all three of them on Twitter and so far, that hasn't helped me out much (Brad uses it infrequently, Fred mostly shares pithy quotes and Brian generally lists which neighbourhood he's visiting that day).

So, let's tour their websites! 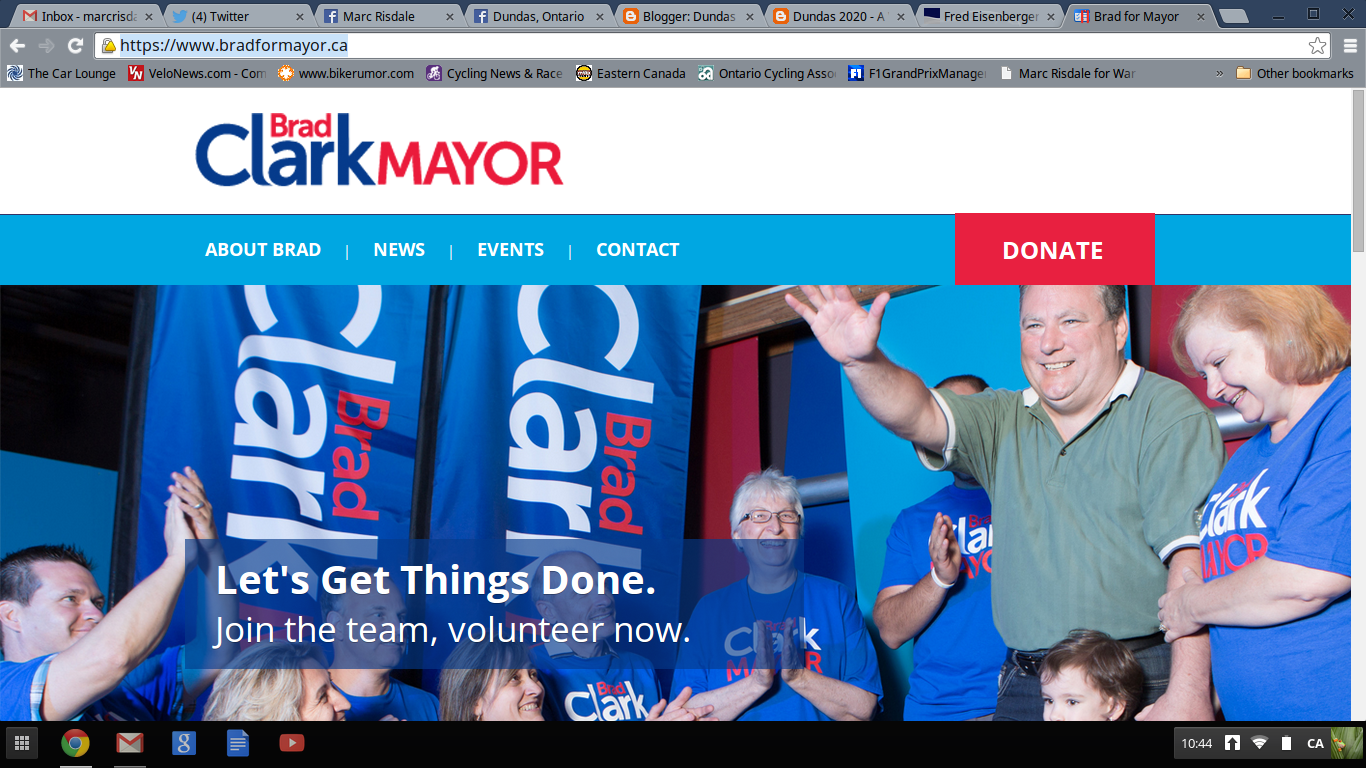 Cons: Was a Provincial cabinet minister in the Mike Harris government. 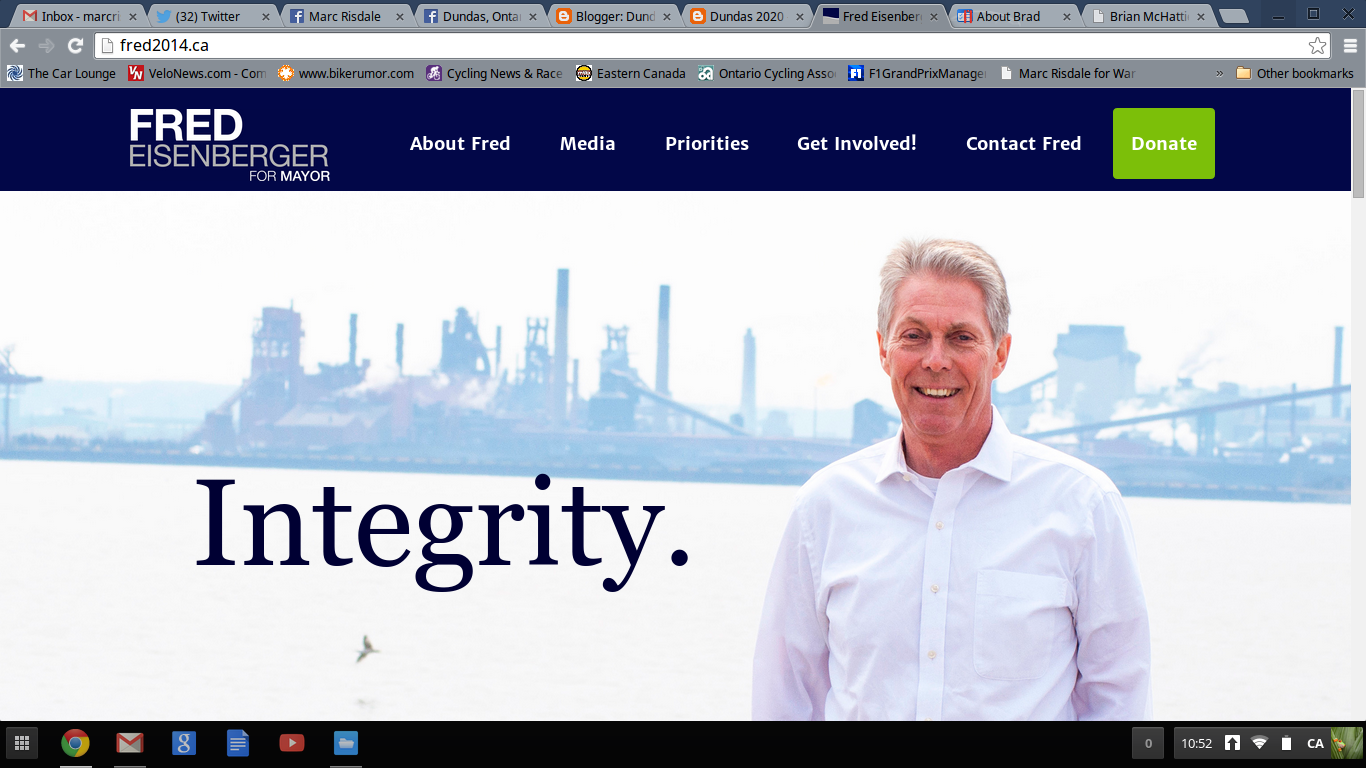 Pros: Was a Councillor and Mayor, lots of ideas.

Cons: Has been relatively quiet since leaving office. 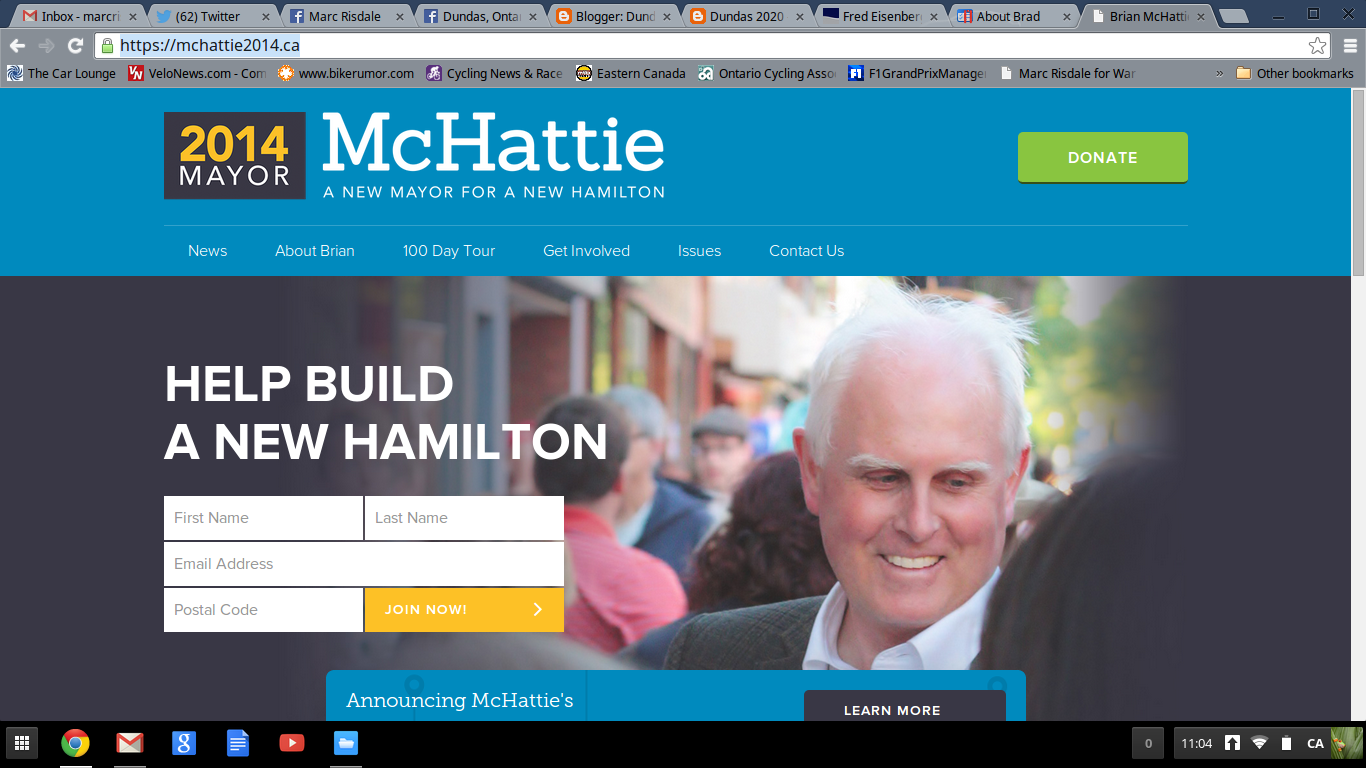 Slogan: A New Mayor for a New Hamilton

Pros: An active Councillor, Chair of HCA, lots of ideas.

Cons: Might be tough to move beyond his appeal in Ward 1.

Well, that was interesting but I'm not sure I'm any closer to making a decision. Good thing there are still 61 days to go!
Posted by Marc at 19:36

Marc
Hi, my name's Marc and this blog will document my adventures in running for Councillor for Ward 13, Dundas. www.marcrisdale.ca, www.facebook.com/MarcRisdale2014 @risdale4dundas